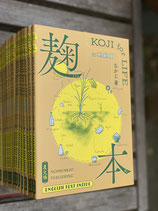 The most comprehensive and practical Koji making book by Nakaji, the founder of Koji School in Japan, and one of the most prominent Koji educators in the world. Shipped worldwide.

All starters are imported from 'Hishiroku', one of the prominent Koji makers in Japan with 300 years history behind them supporting the traditional Japanese condiments industries and sake makers.

Koji spores are selectively bred and blended by Hishiroku for the best performance for the chosen purposes. For example, some spores performs better at protease production that breaks down protein into amino-acids, therefore, they are good at fermenting protein rich food, such as soybeans and meat, turning them into umami bomb. The koji spores chosen for this purpose are the best performers at the low temperate range which encourages protease production.

We recommend to use only the Koji starters from the renowned Japanese Koji makers every time you make Koji, instead of trying to reproduce the spores which could invite contamination with other microorganisms.

Please note that we are suspending the shipment of Koji starters to the EU due to tightened regulation until further notice. 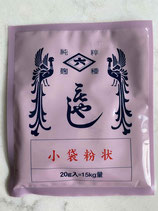 The most versatile Koji Starter from Hishiroku, adaptable and strong. The Best Koji Starter for protein rich food. Good for making rice Koji and Barley Koji for miso. 20g starter makes up to 15kg Koji. 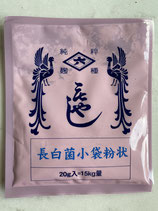 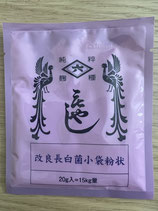 Makes the whitest long-haired koji. Enhanced scarification. Ideal for rice Koji making for amazake and sweet miso. 20g starter makes up to 15kg Koji.
Store at room temperature away from the humidity before opening. After use, left over should be wrap tightly in clingfilm to cut out from the air, keep in the fridge. Best before 6 months after purchase. They are still active but will be weakened as time goes on. 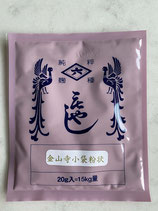 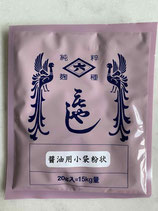 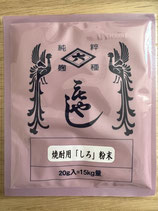 Storage and Handling of Koji Starter

·       Once opened, keep it in an air-tight container or Ziploc bag, preferably with a desiccant, to avoid the moisture and the cross contamination. Store in the chiller drawer in the fridge.

·       20g of koji starter makes up to 15kg of rice koji. For small volume of koji making, use 2-3 times more starter to ensure the best result. For example:

·       The koji starter maker HISHIROKU recommends that the koji starter should be used up in 6 months. Nonetheless, it does not mean it is unusable beyond this date. Koji germination rate lowers with time, so you need to use more koji starter to compensate the reduced performance. Although the germination cannot be guaranteed, it generally lasts for a lot longer than 6 months.

Koji starter is not suitable for propagation

Koji (Aspergillus Oryzae) is a type of mould, native to Japan. Unlike yeast which grows fast by budding, Koji grows much slower by germination.

Slow growing means that it is more susceptible to cross contamination during the propagation.

The koji propagation requires the specialist skills developed by the Koji makers through generations. Each koji starters are selectively bred and blended for the purpose, therefore, any attempt to propagate at home for continuous usage may jeopardise the intended function of the koji spores, and even risk safety.

How to store the rice koji

As soon as the rice koji is made, you need to dry them for 1-2 days in a cool, clean place out of the direct sun light and wind to stop further fermentation until you are ready to use them. After drying, store them in an air-tight clean container or vacuumed bag as follows:

Available to ship to the UK address only 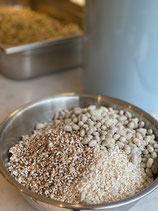 Fresh koji. Store in the fridge and use within a week.

Subscribe to receive the latest news and events, cooking classes and supper club!